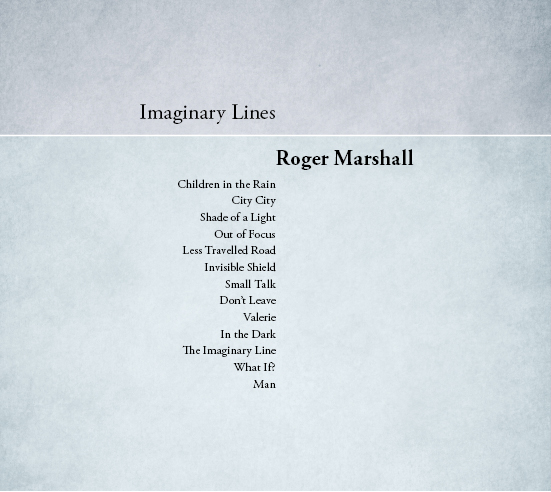 Imaginary Lines is my second project, following on from Over There, with Jono Lonie recording at Earwig studios. It was done over the first 6 months of 2013. Again it was recorded live on 2-inch analogue tape. This album has drums appearing on some tracks and some other instrumentation. Jono is playing electric mandolin on some songs - sounding like electric guitar (outro of Shade of a Light). Bede came in late in the day and added delightful keyboard flourishes, especially Don't Leave. Christelle's mournful harmonica is lovely. I am so grateful to others Kerry, Gordon and Murray who also contributed. It got a perceptive review from New Zealand Musician:


Whereas previous efforts have seen him rooted quite firmly in a folk/Americana style, Roger Marshall's fourth recording is a different beast. For one the band's changed, there's drums now and the mandolins and guitars have gone electric. At the start of the opener, Children in the Rain, we even hear the mandolin used to create an almost synthetic effect. Recorded to tape at Earwig Studios by Jono Lonie, the result of this experimentation is interesting but mixed. At points the new band and style fits the songs brilliantly, the title track and Shade Of A Light are great examples of this. However, on others like Invisible Shield it feels like the band overpowers what would have better suited his previous, rawer style. Ultimately, it's the softer takes on the album which make the biggest impression. The opening to Small Talk is a gorgeous fingerpicked guitar part and Less Travelled Road has the kind of downbeat groove that doesn't need drums to maintain interest. Don't Leave and What If? are the two softest songs. They're short and stripped down and honest and when they come on, the world seems to disappear. The album closes with Man, which to me shows the kind of instrumentation Marshall's songs work best with. It keeps the acoustic guitars but adds the drums and found percussion to create a solid groove, over which Marshall can recite his early Dire Straits-informed lyrics. Overall a strong album, with refinement this new style could well produce some seriously great results.

Shade Of A Light 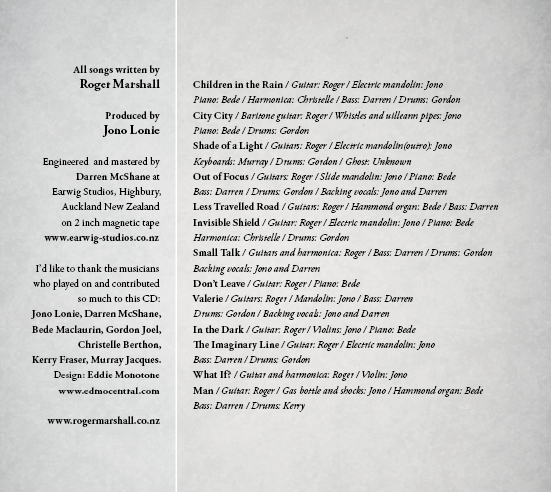 Here is poster for a gig in Beijing at the Jiang Jin Jiu bar. It is here because sadly this bar in the old hutongs between the famous Drum and Clock towers are no more - my favourite place in Beijing demolished, probably being replaced by Disney world hutongs.  "City City" on Imaginary Lines written some years ago for the destruction of old Auckland is in memory of the hutongs! 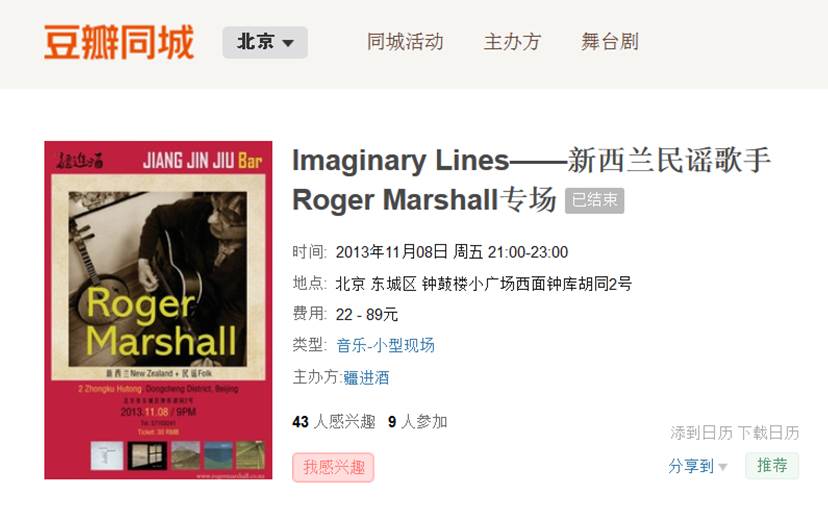