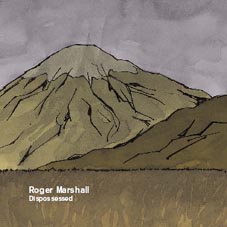 The songs on Dispossessed were recorded by me at home around about 2005-2008. Some of the "instruments", other than guitars and harmonica, come from a Roland GR-20 guitar synth I was messing about with at that time. The "panpipes", for example on Dispossessed, which seem to suit the song, given the dispossessed native peoples of South Americans past and present. It is the theme of the album in other tracks too. Child's play for example, though a bit grim, is for the suffering dispossessed children of the world.Listening now I like this album. But I'd probably drop Mystic 2 (which is a silly sequel to The Mystic on Backtracks) from the bunch!

This album was put together after the Backtracks and Lost Count albums. I think of these three albums as a kind of trilogy as I had them printed, as CDs, at the same time and Eddie's great artwork for the covers lends a certain unity to them.

The one and only man

Somewhere in the street

What else could I do(but fall in love)

Jazz in the breeze

Slave to the street

One of the stars